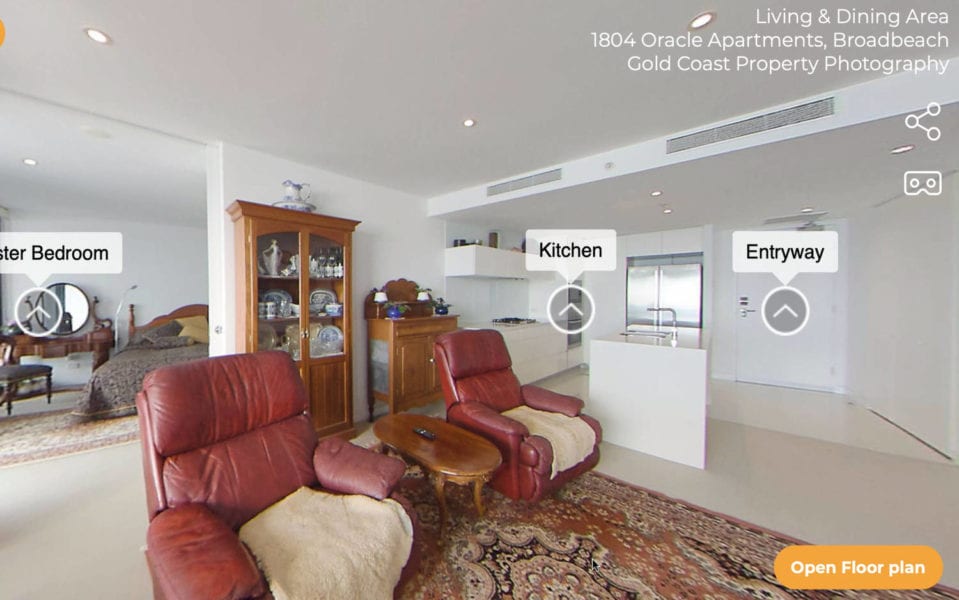 Each360 Photo Tours is photographed on a standard resolution 360 Photo Tours camera, which is small, portable and more subtle when it appears in reflections. As the images are captured in a different way, saving directly to a memory card rather than being stored on a server, 360 Photo Tours include edited photos, including added saturation, basic colour balancing and other benefits that are not necessarily possible with other providers. Combining this with the ability to add points of interest to the tour, such as local landmarks you may see from a balcony or a special feature of the property that may be missed or hidden from the tour (for example, a laundry hidden behind cupboards), these tours can help potential buyers understand aspects of the property that may be missed when viewing on a computer, phone or tablet. Additionally, all tours may be customised upon request to include a custom branded Nadir which sits at the base of every 360 Photo Tours photo during the tour, ensuring that your agency or brand is clearly seen on a virtual platform.

360 Photo Tours can also benefit greatly from the inclusion of a third party floor plan to help users and potential buyers navigate the property and quickly jump from one side to the other through the overview screen. As not every room need-be captured to provide these tours, for example; a messy bedroom or office, a floor plan can help fill any gaps in terms of hidden rooms, storage, walk-in robes, etc that aren't necessarily the nicest things to look at during a photo tour. While at Gold Coast Property Photography we focus on what we do best - which is photography, not floor plans - we can suggest a small number of suppliers who can provide accurate, great quality floor plans that integrate seamlessly into your 360 Photo Tours tour.

Below you will find a summary of the photo packages that are available for your property. Each package listed includes a Standard Real Estate License only and are not suitable for portfolio, display or off-the-plan listings.

Here you will find a summary of the type of 360 photo package that is available for your property. With issues such a border closures, 360 Photo Tours are a great way to show potential buyers and tenants around your listing before they even step foot through the door. 360 Photo Toursare not available as a standalone session and can only be bundled with a Real Estate Photography photo shoot

Each package listed includes a Standard Real Estate Photography License only and are not suitable for portfolio, display or off-the-plan listings.

Also Available In
Premium (up to 20 images) - $395
Premium 360 Virtual Photo Tours also include manual blending of windows where ever possible to give the best indoor-to-outdoor viewing experience possible in a 360 tour.

Try it out for yourself!

The Property Presentation Checklist is a downloadable PDF that is available for free with every real estate photography session which aims to assist you in preparing for your photo session. In listings that will host a 360 tour, The Property Presentation Checklist is even more important as your typical 'hiding places' may not always be suitable when preparing for your session. As such, it is highly recommended that when booking your session, you aim to declutter by clearing rooms by placing excess furniture and clutter in unseen rooms, such as the garage, closed walk-in robes and any other room that will be missed during the tour itself. You can access this by either filling in the Property Presentation Checklist form or once you Make a Booking. Preparation is key in any photography session and when you are marketing your property, extra care is vital to getting the best result.

By following the Property Presentation Checklist guidelines, you will know where to focus your attention in each room. From how to prepare your bedroom through to little easily missed elements throughout the bathroom and living areas. The checklist has helped hundreds of clients focus their efforts and aided them in creating a more ‘photo friendly’ environment before the photo session even begins. 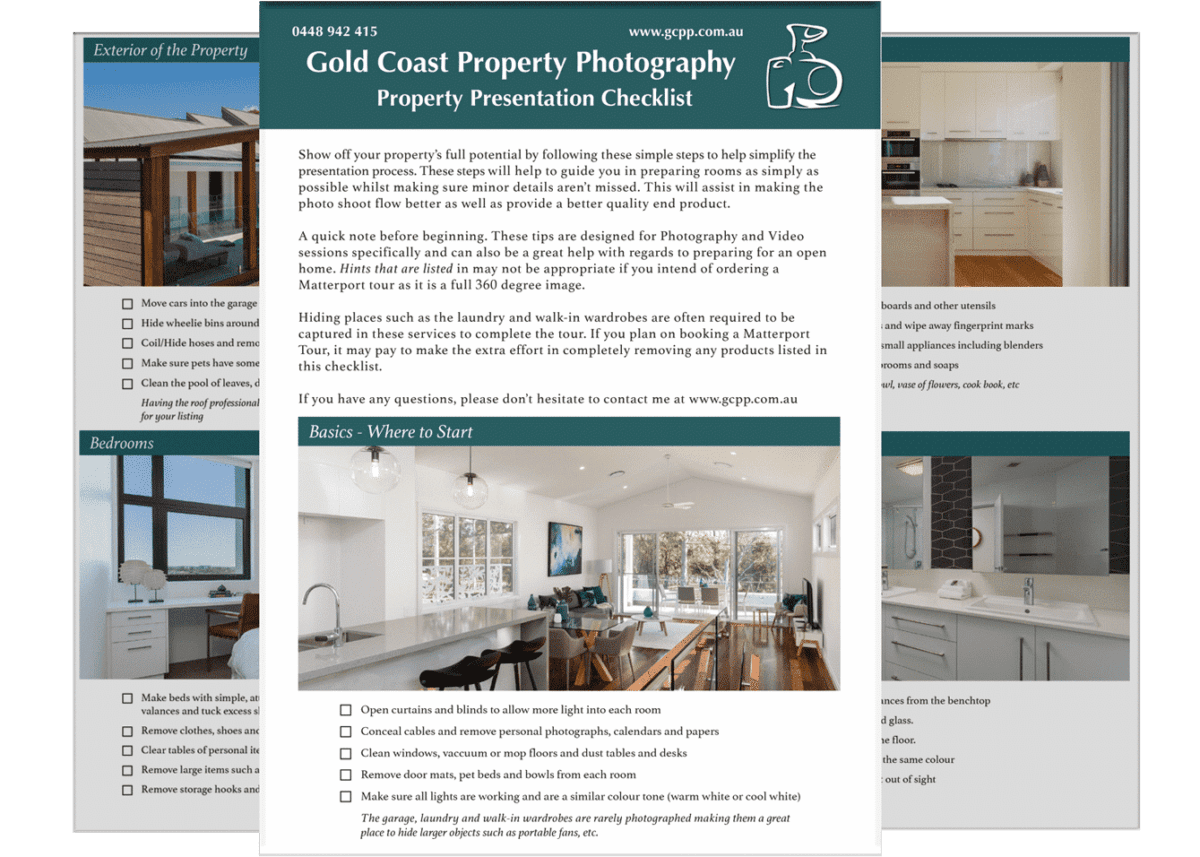